What We Learned About Bulgaria

Cities look very different than anything in the states.  The roads are very small and the driving is absolutely crazy.  People will pass you by creating their own lane--into oncoming traffice or up on the sidewalk, if one is going the wrong way, they just make a U turn wherever, and the parking is wherever one feels like parking.  Some people purchase a parking spot outside their residence or business and they install a lock system that prevents others from parking in that spot.  They then pull up, stop in the middle of the street, unlock the locks, and park.  It is very difficult to find things and get directions, as even the locals do not know the names of the roads.  Some of the roads cannot be distinguished from sidewalks.  While driving around, you may see a horse-drawn carriage in the midst of the traffic. 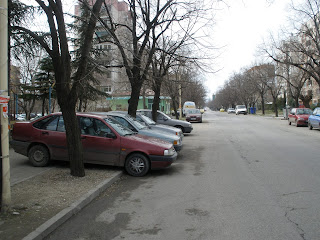 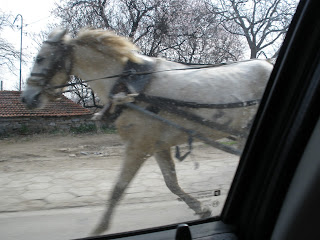 Most people live in owned apartments in buildings four to six stories high constructed in the Communist era.  These buildings are made of cement and have no insulation.  Owners of individual apartments will pay to add insulation to their apartment and this is evident by the addition of three to six inches to the exterior of the building for their particular space.  When they do this, the also will paint their section a different color including purple, pink, green, and blue.  It has recently been determined that adding the insulation and painting the outside is not allowed.  The buildings are old on the outside but often times when you walk into the individual apartments they reflect nothing of the outside appearance and are beautiful and well maintained.
In the states you typically know the location of good and bad neighborhoods but here you can have a mansion right next door to a dilapidated home.  Down the road from nice housing, you may find a gypsy camp.  We saw a gypsy camp where they had set up small shacks that consisted of a board and canvas covering.  There would be a hole cut out of the middle of the canvas to serve as a chimney.  They live out there when it is the dead of winter and middle of summer.  There is no blockage from the elements as there are no trees around.
Bulgarian’s are not in a hurry to do anything, except for maybe drive.  The light will turn green and before one can put his/her foot on the gas someone two cars back, will be honking or will just pass in a non-existent lane.  Part of this is how they have set up the traffic lights because they hang directly above where the first car must stop, making it impossible to see when the signal changes.  They also have a countdown to the light change.  We even observed the nonchalant attitude at the drive thru at the McDonalds.  There were seven people in the car and we placed our order at the first window.  After placing the order, which took a while, they asked if we would like to get a frequent buyer card and complete the form.  The form was completed while still at the first window.
In Bulgaria, some gestures and non-verbal communication is different.  Rather than nodding their head “yes”, they bobble their head from side to side.  They nod their head for a “no”.  This was a difficult adjustment.  Children that we have worked with have been very confused when we nod our head but say “yes” or “good”.  While on the other hand, when we correct our nod to a bobble with adults, they laugh.
Bulgarians love their coffee.  There are vending machines on street corners with many different types of coffee drinks for purchase.  They also like to offer coffee or tea to their guests upon arrival.  In one day, we were offered coffee at three separate meetings in a time span of 4 hours.  If you don’t accept their offer for coffee, like Amy, you may just end up with three drinks in front of you. 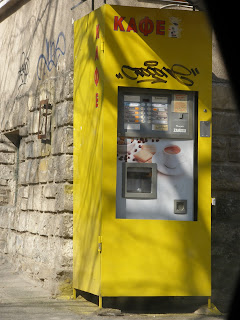 Showers also do not have shower curtains.  Imagine our surprise when we looked in the bathrooms at our hotel and apartment where there was not a curtain.  No matter how hard we tried, water was everywhere.  We did manage to keep the toilet paper dry. 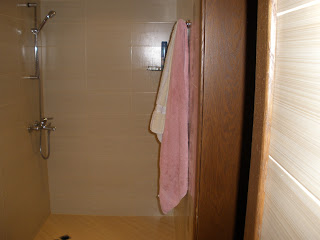